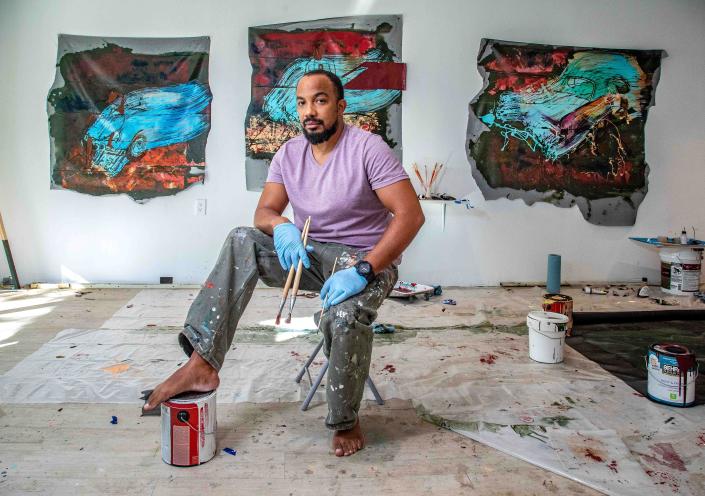 For this year’s New Wave Art Wknd, gallerist and founder Sarah Gavlak is focusing on the idea of ​​service.

“Meaning, how can we best be of service to artists who give us so much and allow us to see the world differently?” said Gavlak, the owner of GAVLAK Gallery in Palm Beach who founded the NWAW in 2018. “I’ve experienced what an incredible community Palm Beach is and supportive it can be.

“And even though many of the country’s most important collectors and philanthropists live here, there are few artists here comparatively. So our programming seeks to expand that community and give artists a seat at the table to talk about today’s critical issues affecting the art world and beyond,” she said.

They Only Come Out At Night: NextGens light it up at Norton’s fall exhibit preview

NWAW returns Dec. 2-4 with a weekend of public panel discussions, gallery strolls and the unveiling of the artist-in-residence studio at The Square.

The mission is to foster dialogue about diversity, inclusivity, immigration and equal rights for women, BIPOC and LGBTQ+ communities through public programs and a year-round residency program that offers emerging artists from underrepresented communities an apartment and studio space in West Palm Beach for six weeks and a $5,000 unrestricted stipend.

“My dream with NWAW has been to have really great artists here that don’t have gallery representation,” Gavlak said. “So it’s the early stages for their career. Sometimes they haven’t even had a designated space other than their bedroom or apartment to produce work, so this gives them an amazing space of their own and time to focus on creating.”

The idea appears to have paid off for at least one of the previous artists-in-residence: Varona will be in a show opening this month at the Whitney Museum of American Art in New York.

Kirk Henriques is this year’s artist-in-residence and will use space donated by The Related Companies at The Square to produce work for several months, giving him the opportunity to get exposure to the community and collectors from the area.

Henriques graduated from The Savannah College of Art and Design with a bachelor of fine arts in film and television and then moved to New York City and worked on commercials and music videos.

He went to graduate school at Cornell University for a studio art degree and has been painting full-time since then. His home base for now is in Merida, Mexico, where he has settled with his family for a culturally immersive experience in “a very relaxing place, away from the hustle and bustle.”

“Being selected for this artist-in-residence is a great opportunity for me,” Henriques said. “I was aware of some of the artists who have passed through here and so wanted to be a part of this program and add my sensibility and artistic voice as well.

“What it means for me as an emerging artist is that my work is resonating with the South Florida audience,” he said. “My plan for here is really just to experiment while I am here. I’m really embracing not having a plan, actually, and that’s why New Wave is such a good fit for me.”

He noted that there was no pressure to produce any new work and that his experimentation was welcomed by New Wave organizers.

“That’s really a big part of how I work in the studio. There’s been a lot going on in the world, so the opportunity to have a space without any predetermined plan or execution is very freeing,” he said.

Henriques considers himself an inter-disciplinary artist and is currently exploring figuration and abstraction as a painter.

“So, what someone will see when they come into the studio is a lot of non-traditional materials like regular house paints I use on a surface of fiberglass mesh screening, things you can get at Home Depot,” he said.

“What brought me to use these materials is that as a painter I actually hated stretching the canvas. I was thinking that to be a painter, and how it was presented to me, was that you had to use certain materials. But for me to actually enjoy painting, I needed to find materials that I gravitated to and that I wanted to use,” he added.

NWAW requires the artist-in-residence to have an open-door policy at the studio.

“To have artists in a community studio open to the public is super-important,” Gavlak said. “People walk by step in and ask, ‘What is an artist-in-residence?’ And the kids who pop in can ask what is going on and learn about what it means to be able to have an artist in their community and actually engage with an artist.”

Regarding the open-door policy, Henriques says he was at first taken aback by the idea, because like most artists, he is used to being alone when creating. But he is now enjoying the opportunity to engage with people about the work he is doing.

Henriques will have his studio at The Square through Jan. 16.

The Bunker Artspace, by invitation only

2:30-5:30 pm: Opening of the 2022 Installation of 10 new exhibitions, two of which are curated by Thelma Golden, director of the Studio Museum in Harlem and Anne Pasternak, director of the Brooklyn Museum of Art.

2-6 pm: Gallery stroll and open house, free and open to the public

The Square in West Palm Beach, free and open to the public

2-4 pm: New Wave artist-in-residence studio will be open to visitors, with Kirk Henriques leading visitors through his studio and discussing his work.

by Johnny Martyr Give me your tired, your poor, your huddled masses yearning to use their aged or damaged Leica equipment… In 2019, I posted the aptly titled 2019 Leica Repair Tech List. Since then, I’ve dealt with some other techs and a few shops, sadly, have closed their doors. So here’s an updated list […]

LOS ANGELES — What does one of the world's most sought-after cinematographers do to relax when he's not scouting, planning...

After disrupting the world of illustrators, artificial intelligence is causing controversy with a new type of machine-generated content: AI photography....

Time for a makeover.Laurey W. GlennMaximizing a compact space like a small patio can be tricky. It usually ends up...

Pelé, the magnificent football player, and ebullient, gracious human, is gone. I only photographed him once, in the showers at...