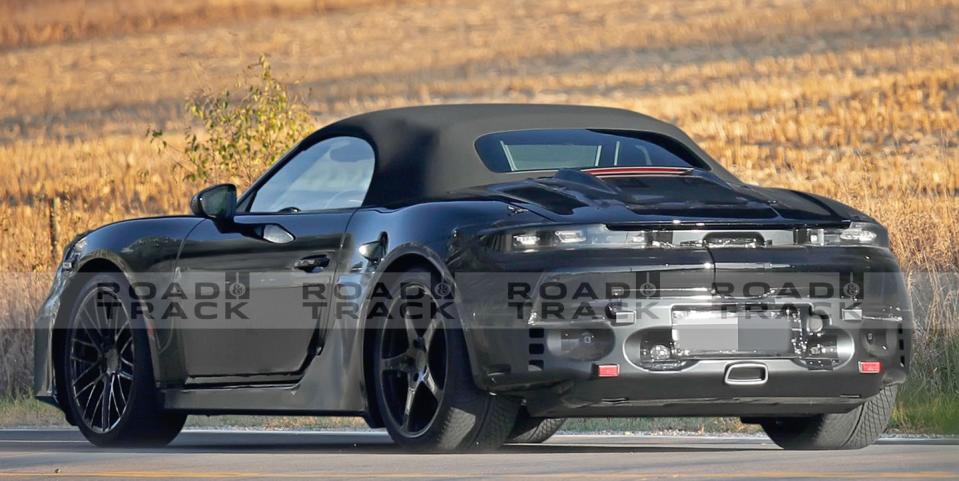 The next generation of Porsche’s mid-engine 718 sports cars is going electric. The German sports carmaker has been coy on details since confirming the news in March, but thanks to spy shots out of Germany, we can finally get our eyes on a prototype for the first time.

Spy photographers managed to catch this black-painted, camouflaged-clad prototype of the all-electric 718 Boxster driving on the road, giving us our best look yet at what the production version may look like. Despite dropping the internal combustion engine altogether, the car still maintains a mid-engine silhouette, with a two-seat forward cabin.

Minor fascia updates to the bumper and lights are hidden with camouflage, but other details are easy to spot. The intakes on either side of the car—a signature feature on the 718 lineup—have been deleted entirely, as there’s no engine in need of airflow, while the single central-mounted exhaust out back is very clearly fake. We suspect the funky rear decklid and bumper are only there for testing purposes.

Porsche has been testing electric Caymans and Boxsters for a while now. We’ve known as far back as 2019 it had test cars on the road, though this is the first we’ve seen of a proper mule. Rumors suggest the cars will run on the company’s PPE dedicated-EV architecture, though stuff like range and power numbers are still up in the air, as an official reveal is still a few years away.

A new exhibition at the Crary Art Gallery will highlight photographers from throughout the region. “The World as...

VOLUSIA COUNTY, Fla. – An upcoming photography exhibit shines the spotlight on students from Pace Center for Girls Volusia-Flagler. The...

Hurricane Ian went through our area two months ago and today we find ourselves taking the time to give thanks....